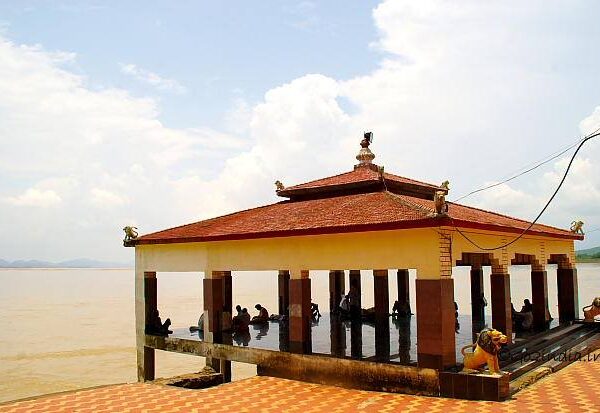 According to history, on the instructions of the King of Puri Gajapati, two brothers named Hatt and Malla established two villages named Shank and Meori here. Over time, these two villages have merged to form Shankhameri. While the two brothers were looking for a place to build their fort, one saw a supernatural phenomenon in a place occupied by Shabar and knew that it was Birmati, the right place to build the fort. But the corpse was not ready to vacate its place. So the two brothers fought, after the death of Shabar in the war, they also fought with Shabari. Shabari also lost, before his death he instructed his two brothers to worship Mahakali and Mavattarika of Kharod. After that, the two brothers built a monk temple in Seth. They named their kingdom after one of the Bhattarikas, Brihadamba, later corrupted to Ladamba.
Devi Bhattarika…
This deity is considered a joint place of worship of Shakta and Shaivism. King Parshuram carved the stone with his arrowhead and worshiped the Goddess Mahamaya Ma’bhattarika, hence this Shaktipeetha is called Parshurampeetha and the devotees worshiped the mother in both ways. According to legend, Parashuram prayed to Maa Bhattarika to make the earth free from harm. In order to attain Vishnukala, Mother advised him to worship Nilamadhava in the Padmasekhra of Kantilor and gave him the Divastra for Nidhana of Milarjuna. According to mythology, after Parashuram was defeated by Milarjuna, after worshiping Goddess Durga, she came to help Parashuram and saved him.
Here boiled fish is offered to the goddess Maa Bhattarika is one of the most famous temple of cuttack, odisha which is situated near Athagarh, Badamba on the bank of mahanadi river. Maa Bhattarika temple is surrounded by the magnificent view of the river and the beautiful range of Ratnagiri mountains. Here maa Bhattarika worshiped as a demonstration of Shakti(Shakti Peetha). It’s like a mini trek to the highest point of the mountains with small temples and caves on the way.

The bus route is Badamba-Athagarh route. Any time you can find bus from badambadi and baramunda bus stand.

From Bhubaneswar or Cuttack attaining Bhatariak.
Another street from Bhubaneswar is , take Nandankanan street and attain Mundali bridge. Then journey on Athagada Narshinghpur – Badamba street. At Gopalpur Chowk you’ll see Bahriak gate. By this street the space from Bhubaneswar to Bhattrika temple might be ninety five KM

Another street is from Bhubaneswar you may journey to Khurda , Baghamari, Kantilo after which attain Rajkiari Junction. Then comply with the route given above to attain temple.
In this street distance From Bhubaneswar to the temple might be round a hundred twenty five KM.
By this street you may go to Kantilo Nilamadhab temple.
Bhattarika temple is at the bottom of hill Ratnagiri and simply with the aid of using the facet of river Mahanadi. Here Mahanadi river water circulation hits the immediately financial institution and takes flip so quite risky for swimming mainly at some stage in wet seasons. There are one of a kind water ranges marked in one of a kind years. During flood in river Mahanadi water enters into the primary temple complex. Local monks of the temple shift the statue to better vicinity at the hill in the back of the temple and retain with the day by day rituals.

From Bhattarika temple you may see ( distance view of ) Kantilo Nilamadhab temple positioned at different facet of the river Mahanadi.
Mahanadi River with the aid of using the facet of Bhattarika Temple
Events and celebrations
Pana Sankrati is taken into consideration to be auspicious day right here. All tuesdays of Chaitra month of Lunar Calendar ( falls in March – April ) devotees go to temple for Darshan of Goddess Bhattrika. Bhattarika Devi mantra

Accommodation
Odisha tourism improvement corporation panthanivas is to be had close to the temple. This is the best lodging to be had close to the temple. Usually devotes go to temple at some stage in day time and go back in evening.
Because of its lovely vicinity with the aid of using the facet of river Mahanadi that is a well-known picnic spot for colleges and schools at some stage in iciness season. This isn’t always a secure vicinity for boating or swimming and there are numerous incidents of drowning right here